We were invited by the Swedish Institute, the Swedish Embassy in Cairo and Enpact to join the Swedish Delegation and attend the RiseUp Summit 2019, which is one of the MENA region’s largest innovation and entrepreneurship summits taking place at the American University in Cairo.
The RiseUp Summit unites and brings startups and investors together and creates a platform for them to learn from each other. They aimed to attract over 10,000 attendees for this year’s three-day event and the theme for this year was ”Journey of Growth”, which was combined with elements of innovation, tech and creativity. 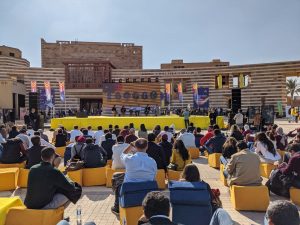 The conference was eye-opening in many ways; it was refreshing to see how such a big event could be so well put together, and it also made us widen our horizons that are normally so heav
ily influenced by western culture, that we in some ways think the world stops there. So much innovation, cr

eativity and great ideas can be gained from this, not to mention a reminder of the goodness of people. So, what was the highlights? Read them below! 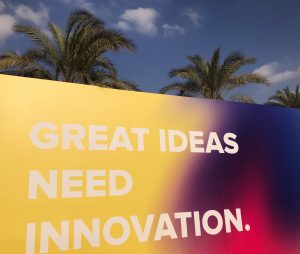 Mona Salma held a presentation about where we are today, in terms of AI Capabilities, and where we’re heading tomorrow, and one of the most interesting quotes of the conference was given during her talk: ”AI can do many things, but it can not take the place of the human mind… yet”. She discussed how the line between human and technology is slowly fading away and how we, as individuals and groups, have the potential to live longer and learn faster by using 4IR technology.
Panel discussion: AI FOR GOOD
Microsoft, Lyra & Localized
”AI FOR GOOD”
Discussion about the different uses and ethics of artificial intelligence and how AI can be used to benefit humans, but also how it can harm us if it’s used for the wrong purposes or fed with other data than for its purpose. The panel also talked about how AI has become increasingly inherent in facial and voice recognition systems and how the biases of AI systems can be worked against, like for example by creating documentation for the data used to train AI systems, and how large companies such as IBM, Google etc. are addressing the issue.
Claudius Boller: Spotify’s journey in Mena: Bringing music to a local audience
Spotify’s managing director in the MENA region 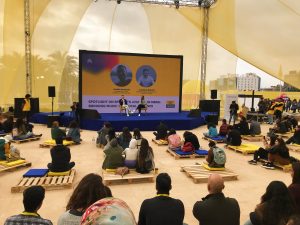 Throughout his career, Claudius Boller has brought music to the people, whether it’s been on behalf of Arvato-Bertelsmann or Universal Music. Nowadays, he works as a managing director for the MENA region at Spotify and has helped the brand establish a presence there. From having no users in MENA, Spotify is now launched in 13 countries within the region, which has one of the youngest and fastest-growing population in the world. Claudius spoke about how they made Spotify available in Arabic, the challenges they faced due to the region’s diverse landscape with the various dialects and cultures, and how this all had to be taken into account. He also discussed the problems with internet connection throughout MENA and other places in the world, and how Spotify worked around it by launching Spotify Lite, which helps users to play millions of songs offline. What surprised Claudius the most during the launch of Spotify in MENA was the high usage of smart speakers, in-car integrations, and smart watches used by people to control Spotify. So in other words, Voice is also taking over there! 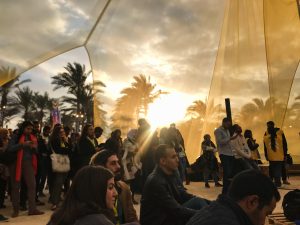 Valentina Primo: Refugees and Startups
Founder & CEO at Startup
Startups without Borders connects the most ambitious refugee and migrant entrepreneurs with resources to grow their business, while providing investors with an entry-point to under-the-radar startups with disruptive potential. Valentina shared the work they do at Startups without Borders; how they put investors, incubators, mentors and corporations together and make things possible. She also shared how they will soon be launching a platform for business angels and investors, giving them access to a pool of high-potential migrant and refugee-led startups to make these connections accessible and easy.